On page 8 of our March 29 issue, we’ve played a little prank on PBA. Where you would normally find a photo essay and the Looks page, you instead have three Onion-esque takes on PBA life. These stories are fictional labors of love, each written to bring a smile to your face. Read through, leave us comments and let us know what you think. Each story is listed below in its entirety with some pretty amazing artwork (if we do say so ourselves).

Students protested Thursday in hopes of forcing Palm Beach Atlantic University to drop the requirement making it mandatory for all students to carry health insurance.

“We’re tired of the socialism,” said Brittany Blonde, a fifth-semester senior at PBA.

Blonde stood at the corner of Pembroke Place and Olive Avenue clutching her surfboard in one hand and a sign reading, “We Shalt Overcometh!” in the other.

“Requiring us to have health insurance is a violation of our ninth amendment rights,” Blonde said.

Fifty students gathered throughout the day, many holding signs with slogans similar to Blonde’s: “Don’t Make Me Healthy,” “I Don’t Care About My Teeth,” “What Would Jess Moody Do?” and the popular “What Happened to Free Enterprise?”

Vance Miller, director of Health and Wellness at PBA, said the requirement is not a sign of socialism, but rather of care for students’ health.

“We don’t want any student to get sick and not have access to care,” Miller said. “That’s why we have the Health and Wellness Center. A sick, untreated student can infect the rest of the population, especially if they live on campus.”

However, many students feel the Health and Wellness Center is an extension of the socialist principles currently governing PBA.

Many students shook their heads and shouted to disagree while passing the protestors.

“I don’t get it,” said Thomas Perry, a biology major suffering from asthma. “How are we supposed to learn if we’re not healthy? And how can we be healthy if we can’t go to the doctor?”

Still, the chants and signs attracted many students who joined the protest.

“This school has a class dedicated to capitalism and a day dedicated to free enterprise,” Blonde said. “How can we not protest to protect the values on which our university was built?”

Palm Beach Atlantic University is finally getting a football team. On March 12 President Hue Loudon and Athletic Director Ray Brite made an executive decision to develop the new Hillcrest into a new football superdome.

“I think it was about time we got some good ‘ole fashioned football spirit around here,” Loudon said. “We need to start giving FAU a run for their money.” 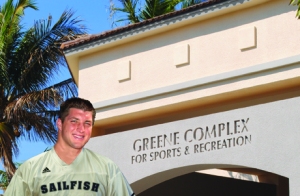 The new superdome will seat over 160,000 people, not including business suites on the first through fourth levels, making it the largest stadium ever built. This is over twice the capacity of the new Cowboys stadium built last year.

The projected cost is $800 million. This will be $500 million less to construct than Cowboys stadium.

PBA has begun recruiting the top five players from FAU, Georgia Tech and Texas A&M. However, the biggest addition is new head coach Tim Tebow, a former quarterback for the University of Florida who has decided to postpone his career in the NFL and head PBA’s football team.

“I’m excited to grasp such a great opportunity,” Tebow said. “I have always wanted to coach for a Christian university.”

Tebow’s contract cost $1.3 million for two years, and with his coaching the team is anticipated to be the best in nation.

“Teams will be quivering in their gear so bad, their helmets will shake right off their faces,” Loudon said.

Tryouts will be held on the intramural field on April 1.

Flagler Towers is being demolished on Thursday, April 1 at 6 a.m.

Flagler Towers has long been the eyesore of the otherwise attractive Palm Beach Atlantic University campus.

An ancient edifice with a brick façade, it houses many students who have been dealt fate’s short straw, sentenced to reside in a building whose linoleum floors creak like the worn and weakened bones of a man who has seen too many years.

Now, Flagler Towers will follow in the footsteps of its southern brother at 1515 S. Flagler Drive.  The 1515 building was imploded on Valentine’s Day to make way for a planned 299-foot tall luxury condominium.

Now Flagler Towers must fall. What structure will rise in its stead? Who but God can yet say?

Not to be outdone by that neighbor at 1515, PBA will replace Flagler Towers with a 301-foot tall luxury dormitory apartment complex.

In order for the university to meet its construction deadline, students must vacate the old building immediately.  Those who do not will be subject to a $1,000 per day fine.